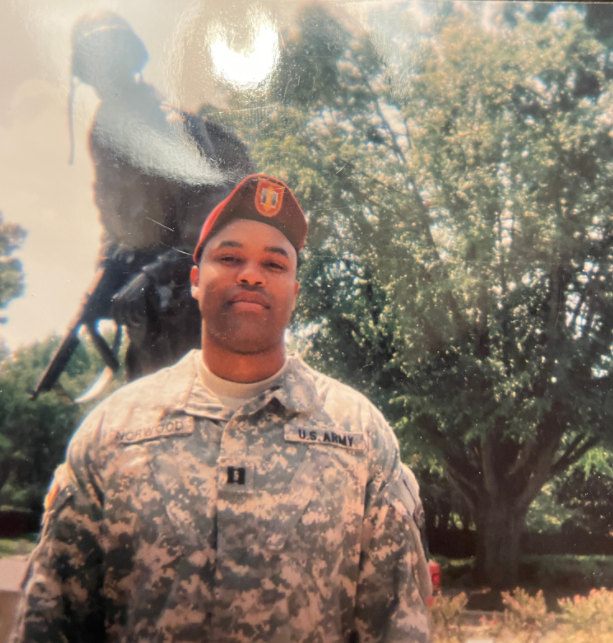 
In early October, the team at the Image One franchise wanted to find a way to celebrate the members of our society who have sacrificed so much to preserve the freedoms we’ve grown accustomed to today. We launched a First Responder/Veteran Franchise Giveaway, and we are pleased to announce that we’ve drawn a winner!

Chris Norwood has been awarded an Image One franchise – Norwood, is a U.S. Army veteran from Arkansas. We took some time to sit down with Chris to talk about his life experiences and discover what stood out to him about the Image One franchise opportunity.

Chris Norwood, the son of a military colonel, was born in Hawaii due to his family’s ever-changing military lifestyle. Chris then attended the University of Arkansas from 1998-2002 and soon after began his journey serving in the armed forces. As a member of the football team and ROTC program, Chris understood the importance of hard work, which has shaped him into the man he is today.

Chris always knew he wanted to join the armed forces. It just so happened that the year before he enlisted, our nation had experienced one of the most devastating attacks on our soil to date, 9/11, which only further ignited his passion.  After college, U.S. Military Officer Chris Norwood was stationed in Fort Bragg and was soon sent over to Afghanistan for his first mission. Norwood would return home only to be deployed four months later to Iraq for another mission.

“It was kinda tough for me to transition for me to go from an officer into the civilian world,” said Chris. “But with the help of my friends and family, I was able to transition back and start my professional career.”

Chris came home with an eagerness to launch his career, but more importantly, build a family. He got engaged to his current wife and is now the proud father of three children.

His time abroad also taught him the importance of relationship building which Chris carried over into his next career move.

“With all my different experiences and everything that I’ve done, I feel like it all aligned perfectly well with being my own boss and working for myself.”

Over the next few years, Chris wore plenty of hats in management, sales, marketing, and director-level positions in a handful of industries.

Chris benefits from structure, so he knew franchising might be the best way for him to accomplish his goal of becoming a business owner. He began to look into different janitorial services franchise brands and saw that Image One had a giveaway opportunity for him. It was a family decision, and once his wife gave the green light, he applied and soon got accepted to go through the interview process with the Image One corporate team.

“One thing I looked at with the cleaning business is that it’s not an overly difficult business to operate and run. I felt like the things I’ve done in my past, like building relationships, are important to being a successful business, and having good customer service.” Chris said, “I looked at others, and I just felt that Image One provided more support for the franchisees, and it seemed like it would be a better fit for me than some of the other cleaning franchises.”

Thanks to his management experience supervising others, Chris understands that he will need to roll up his sleeves to show off his hard work ethic and lead by example. Sales and building relationships are something that he is passionate about, which is something we always look for in the ideal Image One franchise partner.

Chris has big dreams for his janitorial services franchise to aggressively scale his investment by adding more territories to his current portfolio and build a reputation as one of the best cleaning brands in his area. Sports have played a big part in his life, which is why Chris plans to give back to youth girls and boys athletic programs in his community once he finds his footing as a franchisee.

Our partnership with Chris is a natural fit, and we are happy to welcome both our winners to the Image One family. He is still in the process of getting his territory approved, but he believes that he will likely settle in the Northwest Arkansas area.

We are excited to get Chris fully transitioned into his new role, and we are still looking for more investors to join the Image One franchise! Learn more about our 10-year franchise discount and contact us today for more information.